From the outset, it was agreed that our recording area would not only cover Gillfield Wood itself but the fields, hedgerows and pieces of woodland, both on the north side of the wood as well as on the south side.

It was recognized that it was vitally important that we, as a group, needed to gather as much data as we could from this recording area in an effort to protect the wood and the land surrounding, from any future development.

As a rough guide the recording area is between:

The A621, the Baslow Road in the west

Woodthorpe Hall to The Shepley Spitfire pub in the east, this track is known as White Lane.

The southern edge of the Totley and New Totley houses in the north, including Mickley Lane.

SK3079 covers the west end of the wood which includes the conifer plantation and the picnic area, plus Little Wood and a small section of the east central part of the wood where it extends outwards into the fields in a north west direction.

SK3078 covers the central part of the wood including two of the entrances from Totley and the exits on the other side of the wood to Storth House and Fanshawe Gate.

SK3178 covers the east central part of the wood and includes the exit to Woodthorpe Hall.

SK3179 covers the east end of the wood and follows Totley Brook all the way to the Scout Hut and then on to the Shepley Spitfire pub which sits at the foot of Mickley Lane.  This square also includes the entrance to the wood from Totley Hall Lane.

SK2979 covers the extreme west end of the wood including the bus terminus.

SK2978 covers the deciduous trees at the west end of the wood, planted in the 1990s, that extend to the Dyson buildings on the Baslow Road.

Recently the three entrances from the north side have been referred to as Entrances 1,2 and 3. Entrance 1 being approached directly from Totley Hall Lane.  Entrance 3 being approached through the field with the old quarry in it.  Entrance 2 being the middle entrance.  These are mirrored by Exits 1,2 and 3 on the south side of the wood.

Entrances to Gillfield Wood can also be found at the west end and the east end of the wood.

A small piece of Gillfield Wood has recently been referred to as Pheasant Wood.  This falls around grid ref SK310790 extending north west from the main footpath.

Totley Brook flows from the west, under the A621, and down through Gillfield Wood; for a majority of its length, it follows the county boundary of South Yorkshire and Derbyshire.

These are submitted to the Sheffield Biological Record Centre (SBRC).

All records from the above recording area are marked “Gillfield Wood”.

Below are 4 files relating to the results from the May 2019 Flora Walk with Rebekah Newman. We have permission to circulate these to members but please note that Rebekah had clearance to access the land to the south of the brook which is privately owned. This was granted on the basis that it was a supervised walk. Nobody should access these areas without the landowners' permission. There is NO PUBLIC ACCESS to these sites which are on private land on the south (Derbyshire) side of the wood.  Rebekah had express permission from the landowners to conduct the surveys and subsequent walk for us in May.

The following two reports summarising the findings of the Heritage Lottery Funded Phase 2 project are now available for you to either read or download.

These reports represent the culmination of the joint effort between FOGW and Prof. Ian Rotherham's group from Sheffield Hallam University. They have, however, been produced solely by a small dedicated group of FOGW members and are completely separate from any reports produced by SHU. A considerate amount of effort has gone into both carrying out the surveys and into producing these reports so please do take the time to read these fascinating reports

SYBRG has placed its own report on the project entitled "Reconstructing Gillfield Wood's Historical Setting". This can be found by clicking on the following link:

The project, organised by SYBRG with the Friends of Gillfield Wood, is funded by a grant from the Heritage Lottery Fund. It places Gillfield Wood (an ancient woodland), Totley Brook (the stream that flows through it) and its setting into a wider historical landscape context to include field boundaries, ancient hedgerows and industrial sites. The project looks at how the woodland and its setting have changed over hundreds of years and the evidence that still exists today. In addition it also delves inside the wood to investigate the unique and remarkable dressed upright stones/ stoneposts which have been placed in and alongside the brook, most probably in the last three hundred years. Investigating these has helped to place this historic site into a wider context of 'water, geology and land-use'. The field survey findings are supported by archival research. A legacy of the project is to develop skills and knowledge within local groups. 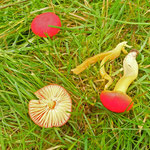 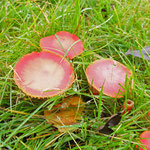 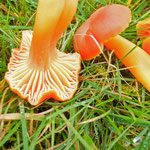 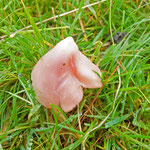 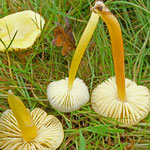 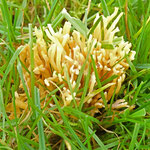 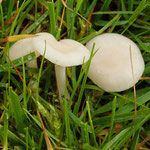 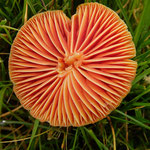 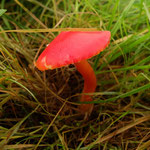 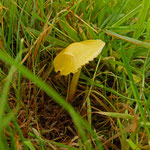 ...and seven from Pauline Burnett taken the morning after a rapid thaw following a severe frost the night before. Shows how resilient these fungi are! 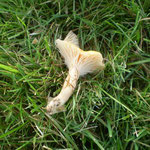 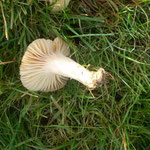 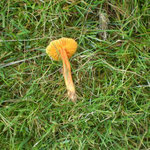 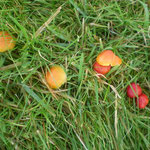 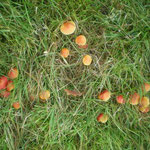 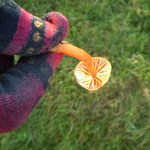 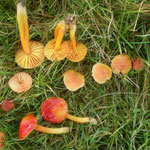 ...and one from Chris Measures of the "holy grail" of wax caps - the Pink Waxcap! 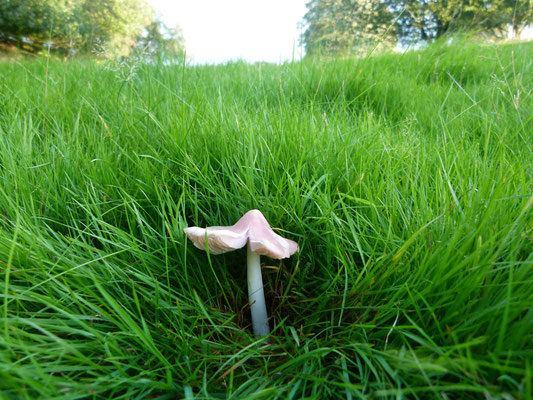 Photos of waxcaps taken in the wood in 2011 courtesy of Chris Measures. 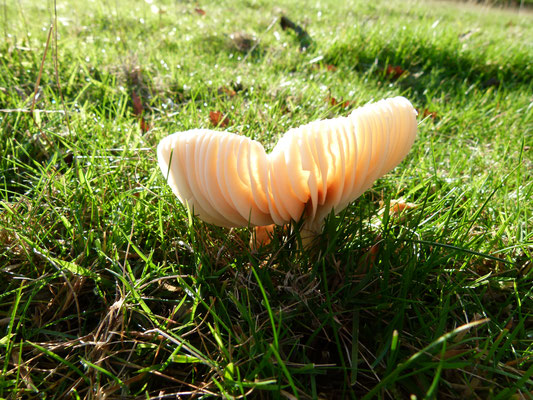 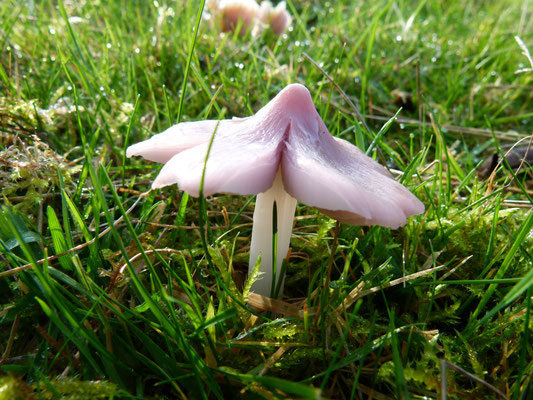 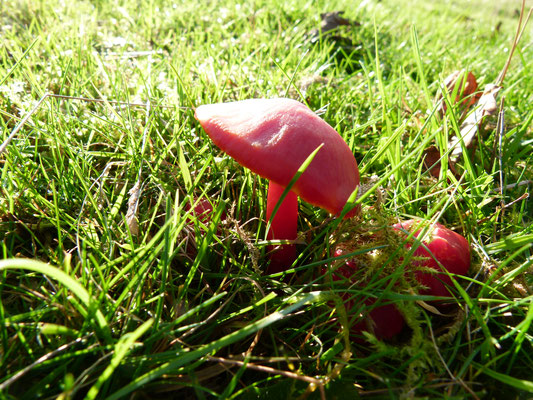 "In the Wet" is an occasional blog to inform you about life in Gillfield Wood in those wet places such as Totley Brook and any marshy area or tributaries close by the brook. And of course there is our new pond which I am beginning to monitor.  I will give you a details of the aquatic invertebrates that I find but only when I can identify them! This is very much a learning and sharing activity for me.  I hope you find the information interesting and the photographs illustrative of my findings.  Please email comments to me at paulhancock1954@gmail.com.

Welcome to "In the Wet".

Had a chance to investigate the pond for wildlife today.  The tadpoles are doing well; they are well spaced in the shallow areas. The planted marginals are looking strong and healthy.

Observation of the pond showed it to be somewhat murky, which was in stark contrast to Andy Brewster's observations yesterday of clear but algae-littered water. Derek Bateson suggested we may have had a Duck feast to have altered the water so much!

Male and female flies of the family Bibionidae (St Mark's Flies) were hovering over the pond.  Some were clearly female as they were dipping their abdomens in the water to deposit eggs.

Two types have been identified by the spurs on the end of the tibia of the foreleg.

Opposite is the female - Dilophus species – identified  the ring of short spurs on the foreleg.

This male fly has two large spurs in the same location on the foreleg and belongs to the genus Bibio, possibly marci, which is the St Mark's fly.

We also have a water beetle visitor, Helophorus grandis …

… and a mayfly visitor Baetis rhodani. The latter has weird turbinate eyes which are orange on top.