Two of the many children engrossed while taking part in our Small Mammal Trapping event on Sunday 10th October 2021.

Six Wood Mice and three Bank Voles were successfully caught, inspected and released.  For the full article, click here to go to the Events page.

Totley Swift Group erecting a dual chambered nest box for Swifts in October 2021.  Hopefully more Swift nest boxes will be introduced with camera and sound system to involve the school children in the lives of Swifts.  Another box has been erected by the Group on Totley All Saints School.  For more detail use this link to go to the Totley Swift Group page. 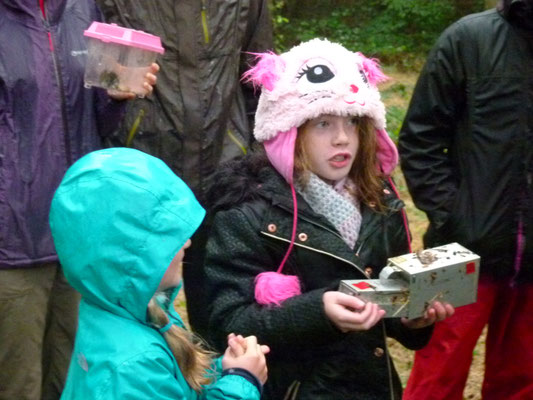 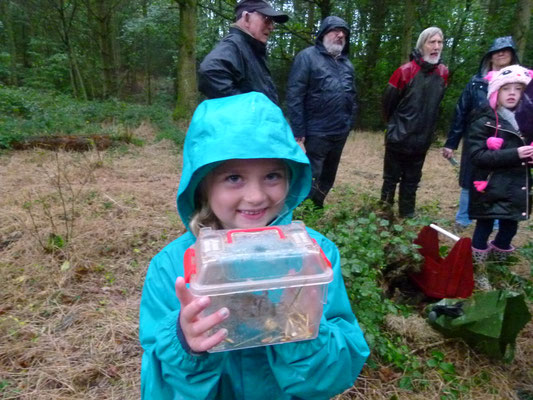 Six Bank Voles and one Wood Mouse successfully caught, inspected and released.  For the full article, click here to go to the Events page.

A Nature Safari for Children and Families organised by Jill Hnat

It is wonderful to see young children enthusiastically engaging with nature.  Encircling a Wild Angelica plant the party of twenty strong was carefully inspecting the red and black soldier beetles that were actively moving and feeding on the white flower heads.   With sharp eyes, the children had also found a number of ladybirds crawling up the stems of the plant and with great care were allowing the tiny creatures to walk onto their open hands whilst they counted the spots on their wing casings.  We all agreed, “seven-spot ladybirds”, just as one took to the wing and whizzed over our heads.

Today was a Nature Safari so we had arranged to wander into a suitable area of tall grasses and wildflowers to capture the atmosphere.  Meadow Sweet and Rosebay Willow-herb towered over the children to add to the excitement.  No Bears or Tigers here, but plenty of mini-beasts in the form of bees, butterflies, hoverflies and other invertebrates to retain the children’s interest; and it was a lovely morning for such an adventure.  On such a morning hoverflies were out in abundance so it was an ideal opportunity to point out their amazing manoeuvrability and to explain how they differ from bees and how these delightful creatures are such important pollinators.

This walk was one of a number of library events held during the summer for children and their families.  Always perfectly organised by Jill Hnat, Jill had provided those attending with spotter sheets and pencils and all were very eager to record and tick off anything nature related, particularly if it moved!  As we gathered outside the library, Honeybees and Bumblebees were observed busily feeding on the flower heads of an Allium; the children were fascinated to see pollen-gathering in action.  Certainly a good start.

Then as we progressed on the short walk to the area of tall grasses we were able to point out and chat about road-side trees and their leaves and we also inspected some wildflowers on the grass verges.  Swifts were then seen flying overhead and were quickly pointed out to the children, they also heard and enjoyed watching a Carrion Crow calling loudly from the roof of a house.  One boy then called out “Pigeon” and a Wood Pigeon was seen to be plodding down the road in front of him.  In a quieter voice he then declared “My dad doesn’t like pigeons!” as he marched on assertively.  When another child called out “Butterfly”, our attention was drawn to a small white butterfly in flight.  Fortunately it landed on a nearby flower to rest in the sun, initially with wings closed so that the veins on the underside of the wings could be pointed out to the children to show that it was a Green-veined White butterfly.  Another species to add to the spotter sheets.

In actual fact several different species of butterfly put in an appearance that morning enabling the children to admire their beautiful markings and colours especially those of a Small Tortoiseshell and a Ringlet.  But when we caught a Comma butterfly in a sweep net and managed to pop it in a small plastic magnifying jar the children were amazed to see up-close the remarkable ragged shape of the wings and the distinctive “comma” mark on the underwings from which the butterfly gets its name.  It is always lovely to see a child look so thrilled when they get to hold such a delicate creature and then release it.  Such special moments you hope will remain with them for a long long time.

The children had of course taken it in turns to use the sweep net, practising their sweeps through some long grass with utter concentration.  Then they watched in anticipation as one young girl held the net below the branches of an Oak tree as each low branch was shaken.  Plenty of tiny insects fell into the net for all to realise just how important these old English trees are for our wildlife.  Pleasingly a spider and a weevil fell into the white net and, after close inspection by all, were added to the list of creatures seen.

As we headed back to the library we passed through Green Oak Park and here we found a cluster of caterpillars feeding on Ragwort.  These were stripping the Ragwort bare; hungry black and orange banded caterpillars of the Cinnabar Moth.  And by luck, just nearby, an adult Cinnabar Moth, a little the worse for wear, was found lying on the grass.  The children could see clearly the contrast in colours between caterpillar and moth, the moth being black with vivid red markings which were very noticeable when it eventually flew off.  “Wow!” exclaimed one child as she saw the colours.

While this was happening a Greenfinch was singing from the very top of a tall fir tree so one or two of the children were anxious to get the chance to use a pair of binoculars; for them a heavy pair of binoculars.  They were just about able to hold the pair steady for a few seconds, and with a bit of “up a bit, down a bit” encouragement, they were able to focus in on the singing bird, much to their delight.

However the highlight of the walk came when we gathered around one of the ponds in the park; a tiny frog had been found at the edge of the pond as it hopped from cover and onto the floating vegetation.  With children’s eyes straining and fingers pointing, several more froglets were seen to appear and then disappear under the water’s surface.  Very quickly a small pot was found and used to scoop up one of the escaping creatures, much to everyone’s excitement.  All the children were then keen to get close views as the frog spread out its long legs in the pot of pond water and weed.  There were plenty of “oohs” and “aahs” as the group looked on.  One young girl then slowly lowered the pot and carefully poured the contents back into the pond.  As the tiny amphibian swam free it was a perfect end to a lovely morning connecting children and families with nature. 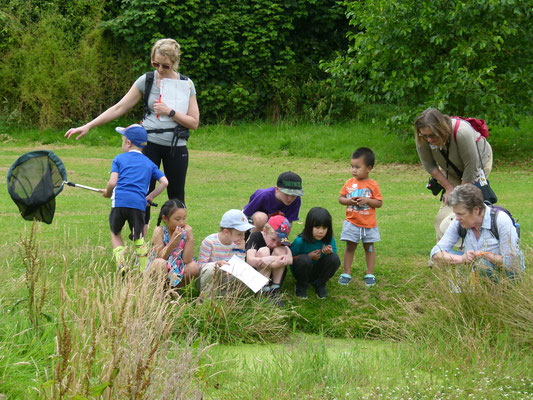 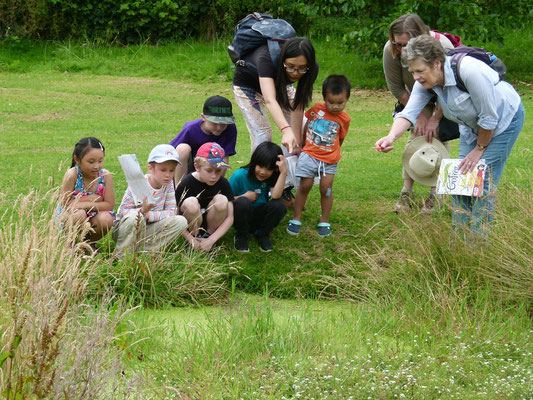