A Nature Walk for Children and Families organised by Jill Hnat

A small group of children, with their accompanying adults, gathered excitedly in the library as they wrote down what they hoped to see on their Nature Walk.  “Trees”, “Flowers”, “Butterfly” and then there was “Frog”, now that would be a challenge.

At least it was sunny so walking into Green Oak Park and standing next to a bed of wildflowers produced an explosion of bright colours to meet the eye.  Bees and Hoverflies were in abundance.  The lovely soft leaves of Lamb’s Ear were there to be gently touched and Lavender was at its best to be smelt.

At this point a caterpillar appeared in someone’s hand, it had hitched a ride on their collar.  Its tufts, hairs and colours amazed the children, it was a caterpillar of the moth The Vapourer.  It proved an ideal time for the children to also be shown an empty chrysalis.  It had been brought along for their close inspection and it was pointed out to them where a Peacock Butterfly had recently emerged from the hole in the end.  Amazement all around.

The leaves on some trees in the park were then compared in the hand, from Rowan to Sycamore, from Ash to Beech.  And then the supply of food, in the trees and on the ground, in the form of berries and beech mast for birds and mammals, was pointed out and discussed.  By now the children were really “into it” and one young girl heard a bird singing, it was a Goldfinch on a television aerial, so the importance of listening was emphasised, whilst a young boy pointed out a butterfly as we passed by a Buddleia.  One of the adults remarked that the children were noticeably growing in confidence.

Arriving near to the Scout Hut a number of butterflies were on the wing seeking out their food plants and those that settled gave some of the group the opportunity to compare the different colours and patterns on the wings.

Sometimes they landed too far away or too high up for the young ones to get good views but one obliging Comma butterfly did at least land with open wings low down for all to admire its rich markings and the remarkable scalloped edges to its wings.  And then a Small Skipper butterfly put in a brief appearance to show off its tiny size.

A male Sparrowhawk was then spotted gliding quietly over the tops of nearby trees and shortly afterwards a Great Spotted Woodpecker flew overhead demonstrating its undulating flight.  So much to hear and see in the area it was difficult to know whether to look up or down, but one sharp eyed girl pointed out a tiny 2 Spot Ladybird which was an excellent find for all to admire.

On the main path all the children were able to see and appreciate a Southern Hawker Dragonfly in flight, hunting, twisting and turning.  Then it was observed at rest, hanging from the outer edges of a bush, with its wings outstretched; its dynamic shape and colours were there for all to see.

The children then had the chance to “hug a tree”, their small hands tentatively touching the rugged bark. Their eyes stared upwards through the branches of the huge Oak tree standing by the brook as they tried to get their heads around the fact that the tree could be at least 300 years old.  They were asked to compare this with the small, perhaps 3 year old Oak sapling that they had been shown in the library car park earlier.

As we stood by the old Oak tree, interesting aspects of natural history relating to and found in the brook were explained by Paul Hancock, a committee member of the Friends of Gillfield Wood, whilst he pointed out different features and specimens on the undersides of rocks picked out of the brook.  A few metres further on an umbrella was suddenly and surprisingly produced, but no, it had not started to rain.  With the umbrella open and inverted and held in place, the lower branches of another Oak tree were given a good shake by some of the children and a variety of insects dropped into it.  This produced another highlight, for all the children to see up close, two Harvestmen that were seen to stride purposefully with bodies raised on their long legs.

Before we knew it, it was time to return to the library; a very rewarding two hours.  But on the way back we did stop outside one very interesting front garden where, much to everyone’s amusement, an extra bird was added to the list, a (stone) Penguin and there just above it was a smiling Frog!!  Yes, a stone one, but all agreed “Mission Accomplished”, children enjoying nature in all its forms and having fun together and outside.  What could be better. 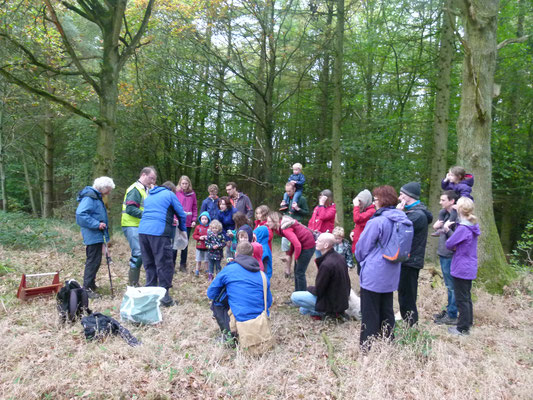 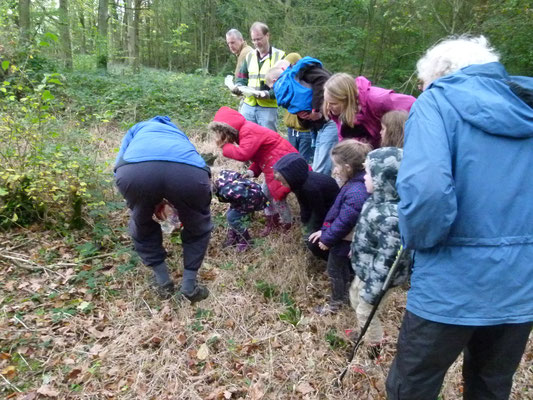