A Nature Walk for Children and Families organised by Jill Hnat

What a relief, the good weather held.  The predicted rain had not materialised in Totley but it had perhaps rained heavily nearby because the rumble of thunder had been heard earlier in the morning.  So a party of seventeen children emerged from the library, into the sunshine, with a great deal of excitement; their parents, grandparents and guardians in tow, armed with a suitable supply of sun cream and liquid refreshment.

As always Jill Hnat had organised this annual event perfectly so that each child had a pencil and a sheet of paper; the sheet of paper was headed “Nature Detectives”.  This year’s event was a Mini-beast Hunt and within seconds the children were ticking the first picture on their sheet of paper…. “Bumblebee”!  They had found several bumblebees landing on a Lavender plant in the grounds of the library.  Here they were able to run their hands over the blue flowers of the plant and smell the fragrance whilst watching the bees perform.  It was pointed out to the children the slightly different way the bees fly around the flowers when compared to the hovering flight of the gentle hoverflies.  “Little wasps!” one boy exclaimed as he pointed to a hoverfly, so it was good to be able to explain that these lovely hoverflies were indeed not wasps even though they appeared to be of similar colours and markings.

Crossing over the road we headed towards Green Oak Park, but before we got there a young girl pointed out a spider.  It was a tiny spider in a web at her eye level; an excellent find.  As everyone carefully gathered on the pavement to take it in turns to get a closer look, two more spiders were found in their webs on a Cotoneaster bush.  One young boy stated that spiders build webs to catch their food; “Flies!” he said proudly.  As the children ticked the second picture on their sheet… “Spider”, a white butterfly suddenly appeared in flight so a third picture was successfully ticked.  This butterfly was a Small White, one of several we would see on this walk.

On entering the park we headed straight for the circular flower bed which has provided so much interest in previous years.  This year it did not disappoint as the children searched for more creatures of interest.  More bumblebees and more hoverflies were studied at close quarters and then a ladybird was found; another good tick…. “Ladybird”.  It was a Seven- spot Ladybird which, as soon as it was found, opened its wing-casing and did an almost vertical take-off to go high up into the sky with parents eagerly pointing out the flight so their child did not miss it; one or two “oohs and aahs” were heard to come enthusiastically from the gathered group.  This was not the only ladybird found, more of the Seven-spot variety were creeping up the stems of flowers and at least two of the invasive species, the Harlequin Ladybird, were captured in pots for observation purposes.  It was lovely to see the children getting close views of these tiny creatures as they passed around the pots.

A snail was then held out in the palm of a hand for all to see.  As pencils hovered to complete another tick on the sheet a child turned the shell over, only to exclaim “It’s empty!”, which caused a number of people to smile. Fortunately one of the mums then rescued the situation by producing a snail that just looked like the one in the picture on the sheet; it was extending out of its shell with feelers moving about like tentacles detecting its surroundings.  Now that certainly did deserve a big tick.  And just to prove how hard the children were searching, some pointed out the slime trails of snails or slugs…. “Look!  They were here as well”.

Each child was deserving of praise for their enthusiasm and contribution.  And as we moved through the park, sharp eyes noticed a caterpillar feeding on a small Ragwort plant.  It was a Cinnabar Moth caterpillar with the distinctive orange and black body.  As the identification was being explained, a young boy stepped forward to open his wildlife book to show everyone pictures of the caterpillar and the amazing moth; the Cinnabar Moth, black and crimson red in colour. A few minutes later several small white moths were seen flying amongst grasses so another tick for the sheet…. “Moth”.  There was no photograph on the sheet to tick the caterpillar find so “Caterpillar” was added to the list of mini-beasts, including “Hoverfly”, that the children were carefully writing on the back of their sheet of paper.

At the outset the children had been asked to use their ears as well as their eyes and as we walked in the park a small group of Swifts was heard screaming overhead and was then seen flying over the roof tops of nearby houses.  And then the children stood very quietly by a grassy bank where grasshoppers can be heard on a hot day.  Unfortunately we did not hear them buzzing on this particular morning, however one child did, when asked, explain quite clearly how grasshoppers make their sound, “By rubbing their legs against their wings”.  He gave a good demonstration too!

Still in the park a great deal of interest was being given to the butterflies that were flying above our heads as we stood by a tall Buddleia.  The bright colours of the Peacock butterfly were noted, particularly those wonderful large eye-spots on the forewings which bring to mind the “eyes” on the fanned tail of a male Peacock.  A Gatekeeper butterfly also put in a brief appearance but a Comma butterfly landed on a flower head and allowed everyone to get great views.  The ragged edges of the wings and the small white “comma” shaped marks on the underside of the wings were pointed out for all to see.  It was very pleasing to hear even some adults saying how much they were learning.

Our next stop was under a spreading Oak tree, partly to provide a little shade for all present and partly to see whether a few mini-beasts could be shaken off the leaves of the tree onto a large white (well, nearly white) dust-sheet that had been stretched out on the grass below.  Although it was not quite as successful as one would have hoped, a few insects did catch the eyes of the children as they searched the dust-sheet for some form of activity.  One or two specimens from tiny spiders to lacewing larvae were potted temporarily, via a pouter, for all to observe more closely.  However, some of the children preferred to hold their arms out and declare “Look what’s walking up my arm”.  Who knows what was disappearing down their necks as they stood directly underneath the tree when the branches were being shaken.  The children were very amused when someone told them to look out in case a monkey fell out of the tree…..it didn’t thankfully.

Our walk slowly moved out of the park and down to the Scout Hut off Aldam Road, with Woodpigeons and Magpies being seen and heard; a couple of snails were also discovered nestling inside the hole in a wall.  Once by the Scout Hut all were advised to keep bare arms in, as we walked west along the main footpath, because there would be overhanging brambles and “stinging” nettles in certain places.  As the vegetation began to get closer to us and much taller than the children, one child was heard to say with excitement “It’s like being in a jungle”.  Several more butterflies and invertebrates appeared on either side of the footpath before we arrived at an open area by the side of the brook.  Chris Brewster and Paul Hancock, both of Friends of Gillfield Wood, had provided their assistance and shared their knowledge along the way; Paul had also come prepared, with wellington boots, to step into the brook and with net in hand fish out one or two aquatic specimens for the children to study.  With the children eagerly gathered, Paul was able to show them two small shrimps and two caddis larvae; and one of the caddis was even poking its head out of its case for all to see.  It was here also that some of the children took the opportunity to grab hold of some ropes that were hanging from the branches of an Oak tree and do, what children do, and swing with giggles of delight in the dappled sunlight.  A perfect setting for a family outing with the brook slowly trickling by.

It was now time to finish the last leg of the walk and as the group progressed carefully by the tall stand of Rosebay Willowherbs with more butterflies on the wing including two Small Skippers, a Wasp was seen feeding on the white flower head of a Wild Angelica.  “Wasp” was another new species to add to the list as was “Chiffchaff”, which was heard to sing its name from the top of a bush.  When told that the Cuckoo was another bird that sang its own name there was a line of children marching along going “Cuckoo, Cuckoo!” with their arms swinging.

Due to the ground being so rock-hard, it had not been possible to find and tick the pictures “Worm” and “Millipede”, so to avoid disappointment, the children were asked if they thought it was possible that we might see a Frog before finishing at the library.  Only one child thought we might and was brave enough to raise her hand.  When then asked if they thought we might see a Pig as well, more than one child said “No Way!” and laughed.  Oh those of little faith in their leader who, as we turned a corner, was able to point out a beautiful small porcelain frog and pig standing on stones in the front garden of a house; both were almost smiling at the children.  “But that’s a statue” one boy said “It doesn’t count” but he was smiling too as were the others.

And so it was, the party retired to the cool of the library with refreshments provided to end another very enjoyable time with nature.  All the children proved to be wonderful company and will hopefully have memories to keep, stories to tell, and will continue to be great “Nature Detectives”.

Please note that the photos below of the boy are from his mum so fully approved for use. 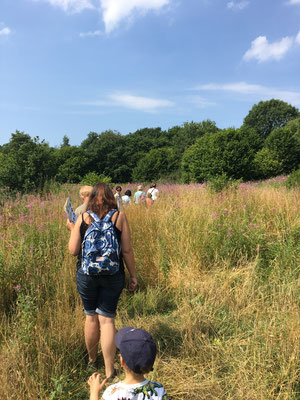 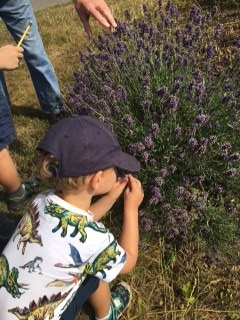 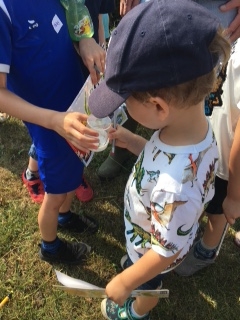 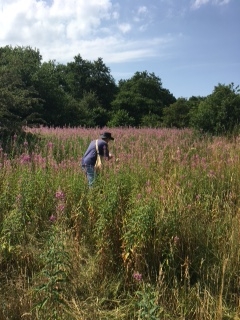