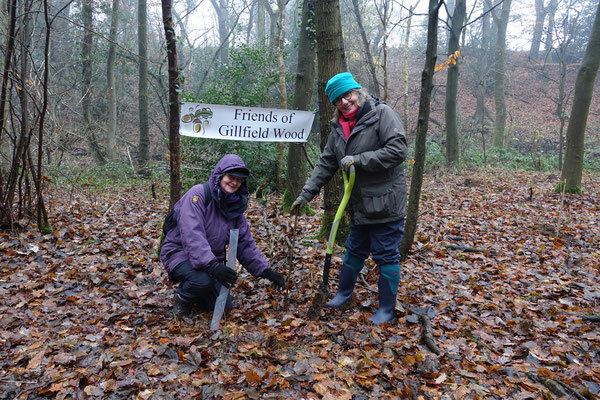 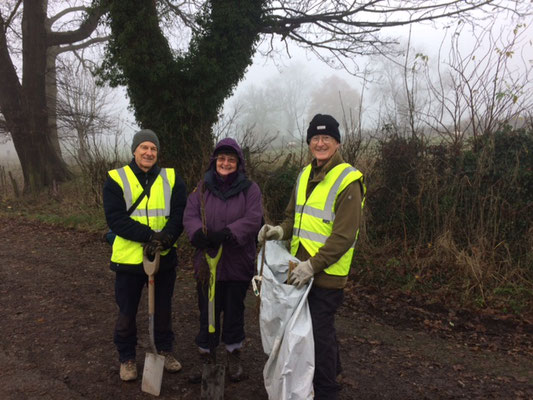 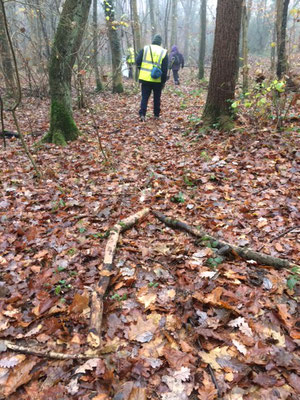 As it was National Tree Charter Day on 30 November, we planted 15 Silver Birch in Gillfield Wood.

11 March - Illustrated talk on A Potted History of Longshaw by their volunteer historian, Thelma Griffiths held in Totley Library.

29 April - AGM and talk by Dr Nicky Rivers of Sheffield and Rotherham Wildlife Trust on The State of Nature in Sheffield, and the results of the Otterly Amazing Project.

21 October - An Illustrated talk on Bumblebees and the Pollinating the Peak project by Rhodri Green of the Bumblebee Conservation Trust.

2 December - An illustrated talk by Stuart Davies (local wildlife photographer) on the Life Cycle of Dragonflies and Damselflies, with local species, the importance of ponds and information on the British Dragonfly Surveys.

During the spring, a new pond was dug out on the path leading from Totley Hall Lane

Late afternoon and the traps had been set.  As we walked back from Gillfield Wood in the fading light, it continued to rain. Robins and Dunnocks were calling from the cover of hedgerows while Carrion Crows croaked from nearby trees, and as we left the fields of Totley Hall Farm we could not help wonder what the following morning might bring.  Altogether there were sixteen traps we would need to check; would we catch anything?

Not the best weather for trapping small mammals but at least the specially designed Longworth traps we were using had plenty of bedding and food in them should the traps trigger and a mouse or vole be caught inside for the night.

Although we rose the next morning to even more rain, a surprising number of adults and children gathered eagerly together, eighteen in total, for a short walk into the wood with the sole purpose of investigating the contents of each trap.  At the first site, seven traps were collected from sheltered and well-hidden places on the floor of the wood.  Five of these traps proved to be empty but, from one of the other two traps, the first small mammal was carefully extracted, along with its bedding; it was carefully manoeuvred into a clear plastic bag for all to see.

There was, of course, great excitement amongst all those attending, especially the two children.  Val Clinging of Sorby Natural History Society was leading this annual event and took the opportunity to explain the differences between a mouse and a vole but before she could finish, a little voice confidently proclaimed “It’s a Vole!” and it was, a Bank Vole.  The vole was then transferred from the plastic bag into a perspex box, allowing everyone to take it in turns to have a close-up view.

The children were then asked if they would like to help find and collect the other two traps from this site, and of course they were only too keen to do this.  They quickly found the traps under the trunk of a fallen tree where bark and leaves had been used to hide both traps. As they did so the children noticed the flaps on the traps were in the closed position.  This does not always mean there is a small mammal inside but sometimes your hopes can rise when the trap feels that bit heavier than when empty.

So, with much anticipation once again, the contents of the traps were emptied into two plastic bags and…… both children were thrilled to find they had each been successful.  With a great deal of pride they were able to show everyone their catch, one Wood Mouse, one Bank Vole.  It was now quite clear for all to see the differences between the two species, the mouse having those larger ears and bulging eyes and its coat was a much lighter coloured brown; and as the mouse stretched upwards inside its box it had noticeably whiter underparts.  What was also quite clear, the mouse was far more active and fast in movement than the more sedate voles.

The other trap from this same site was found to contain another Bank Vole, so nine traps and four catches was regarded as a good result.  Then after various members of the party had had the opportunity to carefully release the mammals back into the undergrowth from which they had been found, we moved onto our second site.  Here another seven traps had been set, four at the edge of the wood and three under the cover of a hedgerow just outside the wood.  The latter three traps were unfortunately found to be empty but pleasingly three more Bank Voles had been caught in the other traps.  On this occasion, as it was still raining, the small mammals were just transferred into plastic bags for identification purposes before being released.

Despite the poor weather conditions everyone thoroughly enjoyed themselves and to fulfil the wish of one of the children a Bank Vole was released onto her open hands as she held them close to the ground.  She was captivated by the moment and was able to watch the tiny creature cautiously move across her fingers and then scurry away into the undergrowth.  A perfect ending to this year’s trapping session, and as we walked back to Totley Hall Lane in deep conversation it was clear we were all looking forward to attending a similar event next autumn; hopefully on a day when it is a little bit drier!

Apologies to anyone who had planned to attend the above event on October 6th.  Due to the adverse weather forecast for that Sunday morning it was postponed.  As it turned out, the weather that morning was far better than had been predicted and better than, as it happened, the 13th.  Hindsight is a wonderful thing.

Sorby Natural History Society covers a full range of natural history interests in Sheffield and the surrounding area, providing for the interested beginner through to the specialist.  The Society was formed in 1918 in honour of Henry Clifton Sorby (1826-1908).  It caters for all ages and abilities and it arranges field meetings, lectures, surveys and workshops.  In addition it produces a monthly newsletter and an annual Sorby Record.  Should you be interested then please do look at the Society website and consider joining as the diary of events each year is quite remarkable.

27 September - Article in The Guardian about Gillfield Wood by Ed Douglas.